Ham Katsu/ Ham Cutlet. It's a deep-fried cutlet made with slices of ham that are coated with flour, egg, and Japanese panko, and deep-fried till golden color. It's such a humble dish, yet there's something downright satisfactory about biting through the crisp layer of golden-brown breading and salty-savory. Ham Katsu Ingredients: ~Thinly Sliced Ham ~ Beaten Egg ~ Flour ~ Breadcrumbs. 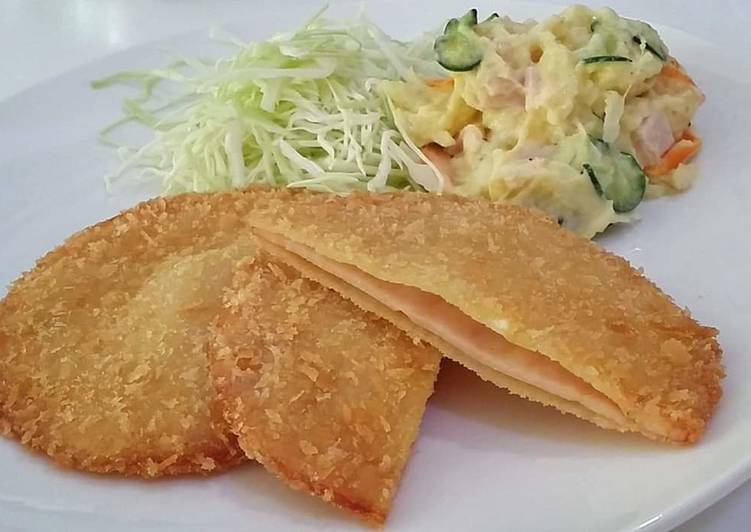 Hamu-katsu ハムカツ is cheep and good for drinking beer. It is ham cutlet that is cooked like deep-fried, breaded ham. You can find the Kana (phonetic writing) and Kanji (Japanese character) for Ham Cutlets Sandwich (Hamu-katsu-sando), and also hear audio of the Japanese name for it. You can have Ham Katsu/ Ham Cutlet using 4 ingredients and 5 steps. Here is how you achieve it.

Katsu is most often made using pork, with chicken coming in a close second, though beef or even ham or hamburger is not uncommon in parts of Japan. I typically stick with pork or chicken, or firm tofu or tempeh if I'm in the mood for a non-meaty version. When using pork, you want cutlets that are nice. Menchi Katsu's appearance is just like Korokke (Japanese Potato and Ground Meat Croquette) and when you see Menchi Katsu displayed along with Since Menchi Katsu is a breaded deep fried meat, it's like Tonkatsu (Japanese Pork Schnitzel) and only difference is that the meat is ground meat.