Traditional Cretan Barley Dakos with Feta Cheese and Tomatoes. Crumble the feta cheese and myzithra (soft cheese) with a fork, or grate it with a grater. To put the dish together, spread the grated tomato on the rusks and add the crumbled cheese. Top with the olive oil and capers. 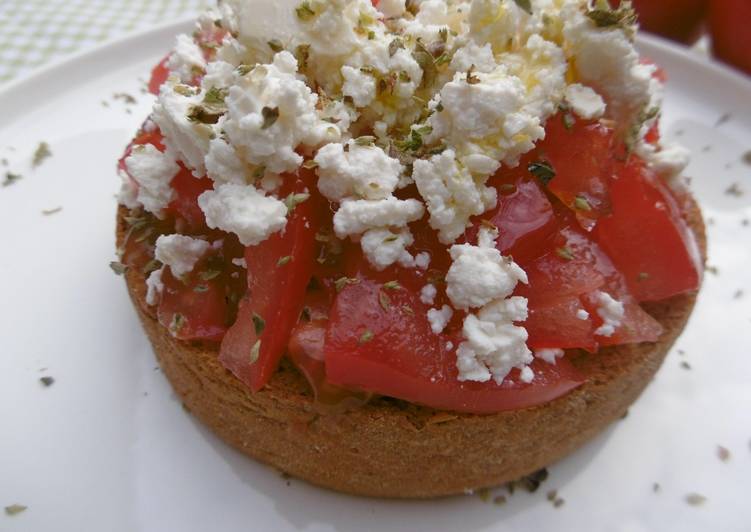 Cretan dakos is often served as a salad, a light meal, or as part of an array of mezedes. Its basis is a Cretan dry barley rusk (called paximadia in Greek); think of it as a large, super hard crouton. The rusk is typically topped with the best tomatoes you can find, olive oil, capers, olives, and cheese…all sorts of healthy deliciousness. You can cook Traditional Cretan Barley Dakos with Feta Cheese and Tomatoes using 7 ingredients and 2 steps. Here is how you cook it.

Dakos is a traditional Cretan dish consisting of a dry barley rusk that is topped with crumbled feta cheese, chopped tomatoes, olives, capers, and herbs such as oregano. It is recommended to garnish dakos with a drizzle of high-quality olive oil. The dish is usually served as a meze or light dinner. Hailing from Crete, dakos is a dish that consists of large barley rusks (paximadi) softened with oil and water and topped with ripe sweet tomatoes.

It is then finished with feta or a Cretan cheese called myzithra. This salad is based on that recipe, and is more a meal than a snack or meze. We eat it almost weekly during the summer. Garnishing with extra virgin, good quality olive oil will give the perfect finish to this traditional Cretan nuts with tomatoes and feta plate. Moisten the nuts with a little water and chill with olive oil.